The week started bright and early on Monday morning with Hyden’s Anzac Dawn Service. The town gathered together around their war memorial and the head boy from the primary school led the excellent remembrance service. It tried hard to rain and the mozzies were out biting the little be-shorted legs of the children standing to attention whilst the last post sounded out across the town. The hotel had laid on breakfast for everyone and there it was good to meet many of the locals including the two local cops one of whom was Polish and had worked in the Met in London – the sublime to the ridiculous came to mind!

Later that afternoon it really started to rain flooding a few of the local roads. The Kiwi then had a quite a moment getting the big blue tractor bogged in the mud. Who said it doesn’t rain in Australia? 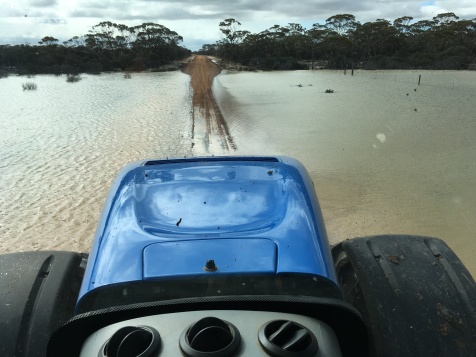 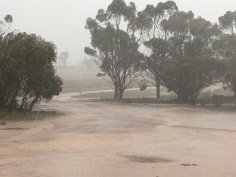 Everyone who the Kiwi tells this next story to thinks it’s funny. Quite frankly I don’t. Make your own minds up… When it’s bedtime we leave a night light on above the dinette. The light is touch sensitive so tap it lightly once and the main bright light comes on, tap it twice main light goes off leaving the nightlight on. Just as we were drifting off the main bright light suddenly comes on. “huh what’s going on?” I crawled out of bed to find out and on the wall next to the light was Humungous Grey Spider (was it the one that had tried to bite Kiwi on the bum in Dunkeld?)  The ghastly thing had turned the light on as it crawled across the wall. I screamed my head off and not sticking around to take a photo I dived under the duvet yelling at the Kiwi to do something! Kiwi gallantly lept out of bed and attacked Humungous Grey Spider (HGS) with fly spray. Apparently (I was told this as I wasn’t watching at the time) HGS scuttled off at speed and took refuge in my handbag where the Kiwi told me he died and was removed.  But… This now poses a more serious problem. Had the HGS been living in my handbag since Dunkeld 3500kms away? Had he rushed home to spend his dying moments with the wife and kids? Now what do I do? Kiwi is delighted as we’re saving lots of money because I’m too arachnophobic to go anywhere near my purse. In case you are wondering what the HGS looked like here’s a photo of one of his cuzzies…. apparently it was a Huntsman.

I will intersperse my blogs with some interesting “factoids” about Australia. Here’s the first:

Last Friday I donned a high-vis vest and helped Boss-Lady guide a charabanc of Chinese tourists around her mum’s farm. It was a riot! The Chinese were on a photographic tour and they were in raptures taking photos of absolutely everything including rusty buckets, old cars, me, tool boxes, every flower in the garden and even the washing line! We then took them to the paddock gate where they fed the cows packets and packets of stale bread – they were thrilled (the Chinese that is). When they left I’ve never seen a group of people more smiley and grateful, endless thank you’s and lots of hugs and kisses goodbye. It was lovely to see a group of people so appreciative of something relatively simple. It made Boss-Lady and I wonder what kind of environment they must’ve come from for the farm to be such a totally outlandish world for them.

Factoid: Huntsman spiders use venom to immobilise prey and to assist in digestion but are not widely regarded as dangerous to healthy humans (Not this homosapian). Huntsman spiders are widely considered beneficial because they feed on insect pests such as cockroaches and crickets. (I don’t care, they’re huge, evil and need to be exterminated) And it gets worse… Males of the huntsman spiders that seems to easily find its way around the world, (tell me something I didn’t know…) have recently been found to deliberately make a substrate-borne sound when they detect a chemical left by a nearby female of their species. The males anchor themselves firmly to the surface onto which they have crawled (by the side of my nightlight) and then use their legs to transmit vibrations from their bodies to attract females of their species, who will approach if they are interested in mating. OMG….

Caravan life has entered it’s fourth week and although a tad cramped we’re doing just fine.   (No more spiders) People back in Blighty have been asking where we are.  We’re in Hyden, Western Australia and about a 4 hour drive due east of Perth.

I’ve just spent my Sunday morning dunging the place out. As there’s no one else here for miles (except for the lovely Mr and Mrs “Farmer” who were out) I could play ELO at full blast whilst giving the place a spring clean and I and now feel it’s clean and tidy enough for you to go “Through the Keyhole..” A prize to the first person who spots the gin bottle….. Till next time…. bye….

12 thoughts on “Spiders in a Caravan”