Firstly my apologies for the loss of content in the first blog I sent out today.  I hit the “save” button followed by the “publish” button and you know what?  WordPress lost a whole afternoon’s work.  All gone.  What a blooming pain and now I’ve got to try and remember what I said and write the whole thing again.  Well here goes….

If you are an advocate of equal rights for insects or a member of the HSLF (Huntsman Spider Liberation Front) then may I suggest you steer away from this blog as I would not wish to hurt your sensibilities.

As you may know Australia is populated with trillions and trillions of flying and crawling insects many of whom are trying to invade our home.  They go in seasonal waves, the fly season, which depending on where you live lasts around 10 months, then we have the tiny ant season, the small ant season, the big huge ant season, daddy-long leg season, the mozzie season, the Huntsman Spider season and we’re now in the black cricket and grass hopper season.

To defend ourselves we have three lines of attack. In reverse order, the first is Mortein fly spray which we don’t really like using because we don’t like the smell nor like spraying it when there’s food or the dogs around.

The second line, is a pitcher plant named Dave.  Dave has long sticky tubes of deadliness which attract “blowey’s” so they check in but never check out.

Dave is named after a friend who introduced us to the Executioner Pro which is the first line of attack!  This may look like a tennis racket but in fact it’s a wolf in sheep’s clothing.  On the press of a button it starts to hum and its strings are electrified so that on impact any insect in its path is completely annihilated.  In its usage I have rediscovered my tennis skills and now have a mean backhand and even better slam dunk! 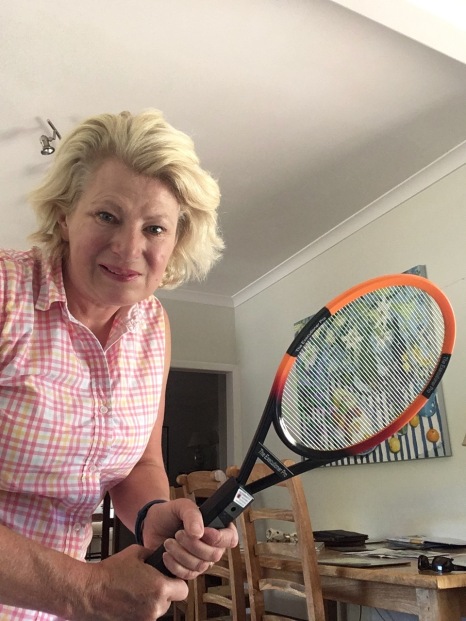 Here’s a photo of the Darth Vader Cricket on our bed head, so named because he’s angular and very black.

We have been busy during the past few weeks and most enjoyably so.  We travelled with the caravan 650kms to the vineyards of the Barossa Valley in South Australia to meet up with the Kiwi’s newly engaged eldest daughter over the Australia day weekend.  We had a very jolly lunch, albeit sweltering in 40c and a nosey around some very good wineries. 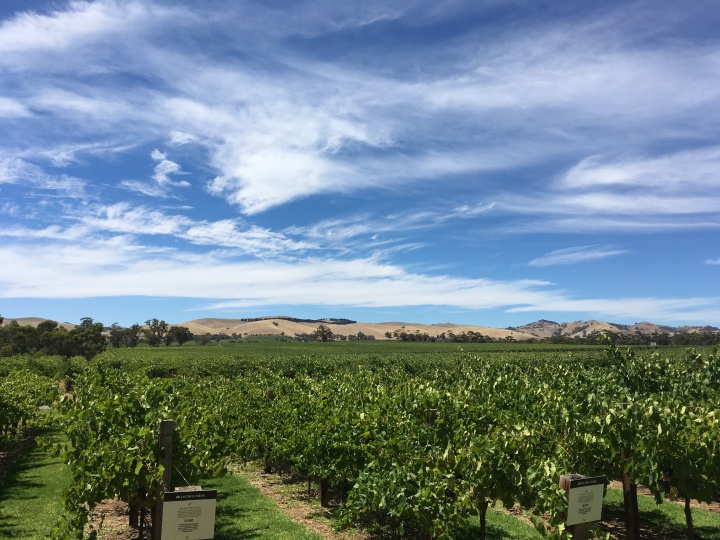 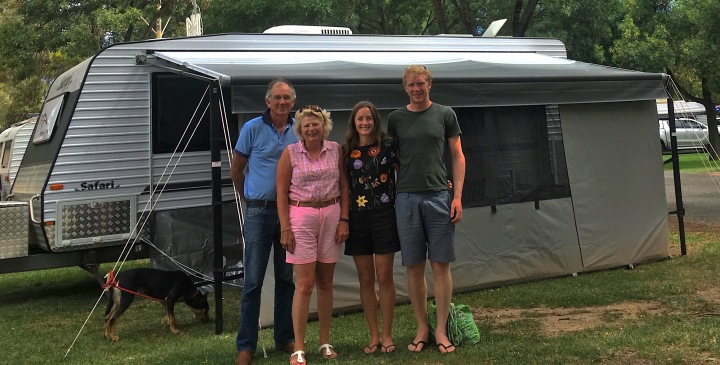 The last thing I did before leaving for the Barossa was to ensure that the garden gate was firmly shut.  Phil and his girlfriends were left in charge of mowing the farmyard and I had learned my lesson from a previous episode when Phil had broken into the garden but luckily I had just caught him in time before he could do too much damage.  Blooming Phil has learnt to open gates.  On our return from the Barossa we found Phil and the girls waiting for us on the backdoor step looking, fat, guilty and decidedly sheepish.  The garden was scorched earth.  The bu***rs had eaten all my tomatoes, beans, proteas, agapanthus, special Daphne plant, herbs, the Kiwi’s prized lillies and kangaroo paws with not a blade of grass left on the lawn.  They had however turned their noses up at the mint, rosemary and courgette plants probably realising that they went quite well with lamb.

We have been waiting for Margot to come into season again and at last she was showing signs that things were happening.  After the last fruitless attempt at getting her into pup we stepped up our game and really pushed the boat out taking her to the vet for three blood tests to gauge her progesterone levels.  The third test produced the results we were looking for and Margot and I set off for the 4.5 hour journey to the eastern side of Melbourne to meet her new boyfriend, Will.  It was love at first site and I left her with Will’s owners for a weekend of lurve.

Whilst the lovebirds were otherwise occupied I stayed with a new friend in the City.  I couldn’t resist the temptations of visiting the vast Chadstone shopping mall (three times the size of Bluewater).  My eyes were on stalks, I couldn’t believe the crowds of people queued up to get into Louis Vuitton and Gucci not to mention the line of drooling epsilons waiting for a Bvlgari ice cream (for heaven’s sake).  I felt like a complete country bumpkin dressed in my country girl garb, give me Kmart in Warrnambool anytime!

Much to our delight we have been playing host to visitors from England and New South Wales and it’s been great showing them around the beautiful but dry looking, Southern Grampians. 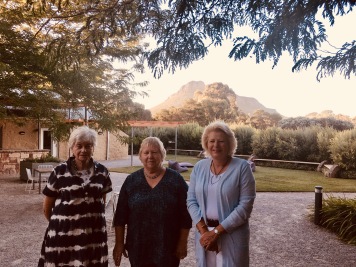 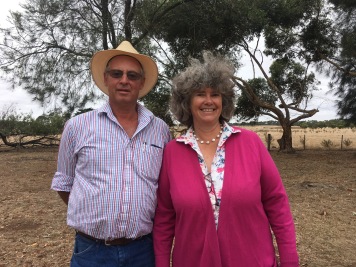 It’s fire season here and the Kiwi has been called out a couple of times but thankfully nothing too serious.

To end I thought older Poms might appreciate this photograph of the main street of Penshurst, 23 kms away.  They will see that it is lined with Elm trees. I was a toddler when the last one died in our garden from Dutch Elm Disease, I couldn’t remember  them at all.  I felt a bit of a fool that I had to ask someone what they were!  Hopefully one day they will be reintroduced to England.

5 thoughts on “A Message for Insects and Other Creatures”