We’ve just returned to the UK from a whirlwind two week trip to Australia to organise our new lives “Down Under”.  I’ve never known jet lag like it – I always thought is was rather a glamorous malaise but oh no there’s nothing remotely glitzy about sitting up in bed at 3am having complete kittens about everything we’ve got to do during our few remaining weeks in the UK.  Just as well I’m not literally having kittens as one of the jobs we’ve got to do is find a new home for our two pussy cats and more kittens would only add to the problem.

Moving swiftly on…. more about our two week trip and our plans…  Our mission was to have another look around the Southern Grampians area for a farm on which to keep sheep amongst the many other enterprises we’ve got up our sleeves.  It was also to meet bankers, estate agents, insurance brokers etc etc.   We arrived in Melbourne late in the evening after quite a good flight with “Qaint-arse” and were deposited at our serviced apartment which was delightfully well appointed.  Next day we wandered round the CBD (Aussie for Central Business District ie town centre) and I couldn’t believe how much it had changed from when I lived there 30 years ago.  Lots more highrises and an amazing array of eateries – how much can an Aussie eat?

On our second day in Melbourne we thought it would be pleasant to have a ride on the tram.  Off we set on the tram which would take us Toorak where I used to live.  After a couple of stops a lady with her arm in a sling got on and I said to the Kiwi (husband) “gosh I think that’s Kiloran”.  Yup it was.  Kiloran being an old friend from the UK and we immediately exchanged the derigeur double Sloane peck on the cheek, shouting at the tops of our voices “what the bloody hell are you doing here?”.  The other passengers were riveted.  It turned out Kiloran was there on holiday and even had several friends living in the Southern Grampians.  How amazing was that – of all the trams in all the world she had to step onto mine….  After much animated gossiping and many “how extraordinaries” we got off the tram and as we did a lady sitting near us who had been pretending to read her Kindle piped up “hope your move goes well!” The Kiwi and I had to go and have a glass of SavBlanc to recover.

Next it was a drive to our chosen promised land in our boy-racer hire car.  No, we didn’t choose it, we got upgraded.  I couldn’t work out why the Kiwi insisted that I did most of the driving.  Then it dawned on me that the rather loud looking jam-jar might be construed as a compensation for a male lacking equipment in the trouser department and would also explain why the Kiwi was sinking lower and lower into his seat taking refuge behind his Oakley’s.  Here is said vehicle….

For the duration of our stay we were encamped at a lovely former Tobacco Kiln.  It had stunning views of the Grampian mountains and our hosts couldn’t have been more welcoming.  New friends were made.

Infact it was this theme of friendship that was the highlight our week.  Having known nobody in our Promised Land, we met so many people, we can now can look forward to a rip-roaring social life.

The wildlife of the region was also something else.  Parrots galore, wallabies, kangeroos (The Kiwi nearly hit one with the Boy-Racer), and to our delight we found a Koala up a tree in a friends garden.

Journey’s end was spent with our Koala bear friends at their ocean view house in Port Fairy, just 1.5hrs from the Promised Land.  It was the most beautiful “Bounty-Bar” beach and I just can’t wait to walk our two golden girls along the edge of the crystal blue water. 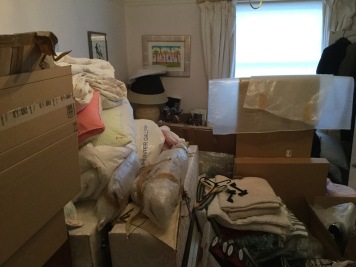 6 thoughts on “How Much Can a Koala Bear?”