For the past couple of months we have living in a complete whirlwind of change.  Literally over the farm gate The Kiwi was offered another job on a neighbouring farm which presented him with much better working conditions and hours, the only thing was it didn’t come with a house.  Where were we going to live?  This little challenge has given us the appropriate sized kick up the proverbial to find ourselves somewhere more permanent to lay our heads and somewhere that we can call our own.  Still not having sold our property in England (don’t even go there….) our budget for our own place was somewhat reduced but no matter plans change all the time and necessitated the need for adaption.

The Kiwi worked out a fortnight’s notice and some very kind friends allowed us to park our caravan in their paddock for three weeks.  The same friends have now partaken of their annual migration to the warmer climes of Queensland for the winter generously leaving us to house sit for them.  Our temporary abode commands the most lovely views of the Southern Grampian Mountains and its great to be living off the farm (workplace) allowing us to do our own thing in our own time.

Having to move all our worldly goods out of the farm cottage and back into our two shipping containers was a bit of a trial as we seem to have acquired an awful lot more stuff.  Are boxes of leaky buckets really worth hanging onto?  Might just come in handy one day…. said the Kiwi.

Meanwhile we’ve been house hunting, we did find a place in Dunkeld and got very despondent when we were pipped to the post and then couldn’t find anything we liked as much.  A worrying couple of weeks followed and then trawling through the realestate.com.au app on my phone one night led me to a little blue house on the other side of Hamilton which had been on the market for ages.  With nothing else better to do one Saturday afternoon we went and had a look.   Well, although it’s small, the little house is set within 10 acres of the most beautiful park land with the most amazing Red Gum trees I’ve ever seen.  To cut a shortish story even shorter we rang the vendors directly (allergic to real estate agents) and our offer was accepted – whoo hoo!  We’re now in the process of filling in endless mountains of paperwork and all being well will move in the middle of July.

Meanwhile…. (as if all of the above wasn’t enough to be going on with…) I’ve also changed jobs.  This time I’m working as a full time Administrator/Receptionist for a firm of lawyers in Hamilton.  Making the transition from part-time to full time was easier than I’d envisaged and helped enormously by having an hour for lunch rather than half an hour.  Our new house is only a 6 minute drive from my work so I’ll be able to get home for lunch to let Daphne and Margot out and which will allow me to keep the domestic wheels turning.  Currently the girls are being walked at lunchtime by a nice lady in Dunkeld and they seem to be quite happy with the arrangement.

In the midst of all the upheaval we have managed to have some fun – here are a couple of snaps from when we went to the Speedway.  The finale was the caravan race – the winner being the one with something still left to to tow! 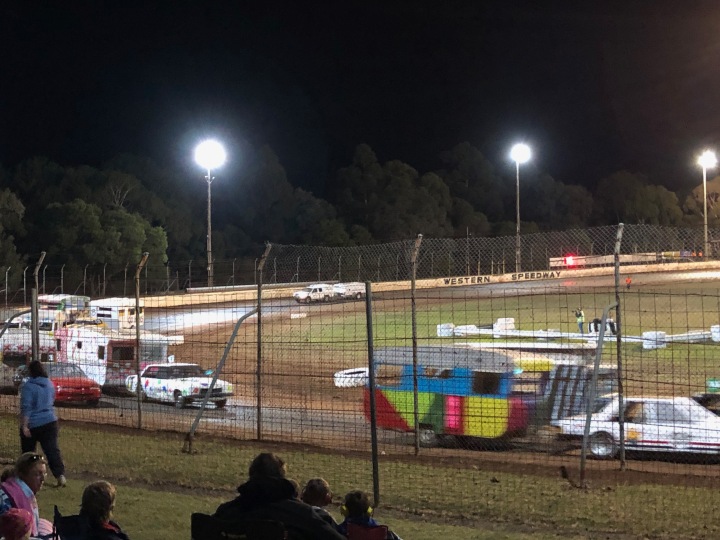 A couple of weeks before we left the farm we took on an orphaned Angus calf and because she arrived with us in time for the weekend she was named Friday.  She was about 4 weeks old and quite a robust, fiesty little thing who didn’t need much encouragement to start drinking her milk from a converted milk container.   We couldn’t bear to leave her behind and the farmerbossman very kindly gave her to us along with our 7 pet lambs, Phil, Liz, Maggie, Kate, Fergie, Charlotte and last but oh so definitely not least, Cheeky-Chops.  Our little farm, including six chooks are now happily ensconced at our temporary abode, the ruminant animals sharing with an enormous number of itinerant kangaroo’s and two resident alpacas, named Dolly and Dot-com.

Friday has thrived and is such a character, following the dogs and me around the paddock mooing and skipping along, chasing the sheep and playing with our Kelpie pup Storm (sometimes known as Stormy Daniels depending on how much trouble she’s in).

However Friday has had her own share of adventures this week too.  Whilst we were at work a strong wind came in and blew the gate to the Alpaca’s paddock open and we think Friday wandered in to say G’day to Dolly and Dot-com.  With even haughtier looks on their faces, the snooty pair chased Friday around the paddock and not wanting to put up with anymore of that thank you, Friday jumped over the fence and took off down the road.

When we got home from work there was no sign of Friday.  We had no knowledge of the antics of earlier in the day, we called and called and in the increasing darkness walked all over the paddock looking for her.  We couldn’t find her anywhere and awful thoughts went through our minds that she’d been pinched or was lying sick somewhere where we couldn’t see her.  With the darkness we had to give up the search and spent the evening not being able to think about anything else. Later, whilst trawling aimlessly through Facebook I suddenly spied a photo of a little black calf loose in our road on the Dunkeld Community page.

Found her!  Some very neighbourly neighbours had managed to catch Friday and had put her in their paddock with their rather stroppy turkey.  Phew, what a relief!  At the break of dawn the next morning The Kiwi and I armed ourselves with some warm milk and found Friday mooing by the gate.  She followed us home, trotting along beside us, milk being the motivation!

So that’s our news for now – Oh yes, just remembered, we’ve sold the caravan!  So we’ve got to live in a house now! My next blog will be from our own home in Australia – what an excitement!

4 thoughts on “All Change!”